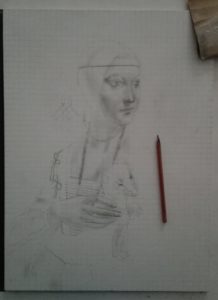 Preparatory drawing on board the Lady with an Ermine

Beginning of the “Dame with an ermine” copy / studio portrait of Leonardo (Lionardo) da Vinci’s Cecilia Gallerani portrait I will make on poplar plywood with measurements as original 54×40 cm. Even here as in the toy, the first big obstacle will be the decorations of the gown that are so finely made to have a thick tip of a pinch … a technique that at the moment I do not think I have and will ever reach and in the copies made others are not even present and visible only to careful observers positioned less than one meter from the original.

Today it is typical of many hyperrealistic painters to work on large canvases with very large subjects (even 2 or 3 times the actual size) to achieve, especially in particular portraits such as pores of the skin. In fact this does not exalt the technique but facilitates it because it allows you to work comfortably since then such works will be visible from smaller media such as photos on the internet or prints on publications that will be about 1/10 of the actual or you will be forced to see in its entirety by the true only by moving away from the picture. In reality

and no one has ever passed Jan van Eyck. Conserved in the galleries Sabauda of Turin and protected by an alarm system reserved only for this painted tablet of 29.3×39.4 cm and it sounds if someone is approaching too much to watch it as of course also happened to me (if you want to see it sounds because you have to be less than 50 cm unless you have a laser sight) that I was alienated and I could not get my eye out of that tablet for 30 minutes as a minimum. In my ignorance when I came home (the times when the smartphones had not been invented yet) I informed me more about the artist and the work and found that what I had seen was a subsequent copy that he himself had realized from its previous 12.5×14.5 cm smaller still in the Philadelphia Museum of Art. 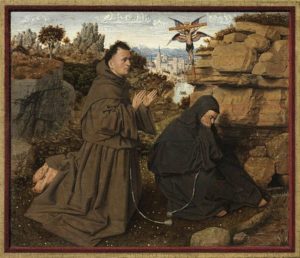 “Dame with an ermine” is one of the paintings symbol of the extraordinary artistic level reached by Leonardo during his first Milanese stay between 1482 and 1499. The work, which ignores the circumstances of the commission, is usually dated shortly after 1488, when Ludovico il Moro received the prestigious honorary title of Knight of the Order of the ermine from the King of Naples.

The identification with the young lover of Moro Cecilia Gallerani is based on the subtle reminiscence that would once again represent the animal: the ermelline, in addition to being a symbol of purity and incorruptibility (Leonardo himself noted that “he first leaves to be hunted by hunters who want to escape the infamous den, so as not to spell his kindness “, that is, the white mantle), is called in Greek galga (γαλή), which would allude to the maiden’s surname.

There is a little followed but interesting interpretation to understand the multiplicity of suggestions that generated the portrait, according to which the work would be a memory of the conspiracy against Galeazzo Maria Sforza: the woman would be his daughter Caterina Sforza with the necklace of black beads on the neck of the lady alluding to mourning, and the ermellino a reminder to the heraldic coat of arms of Giovanni Andrea Lampugnani, assassin and murderer in 1476 of the Sforza. 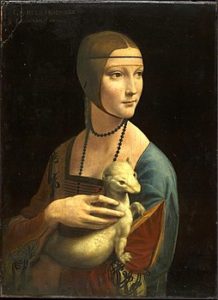